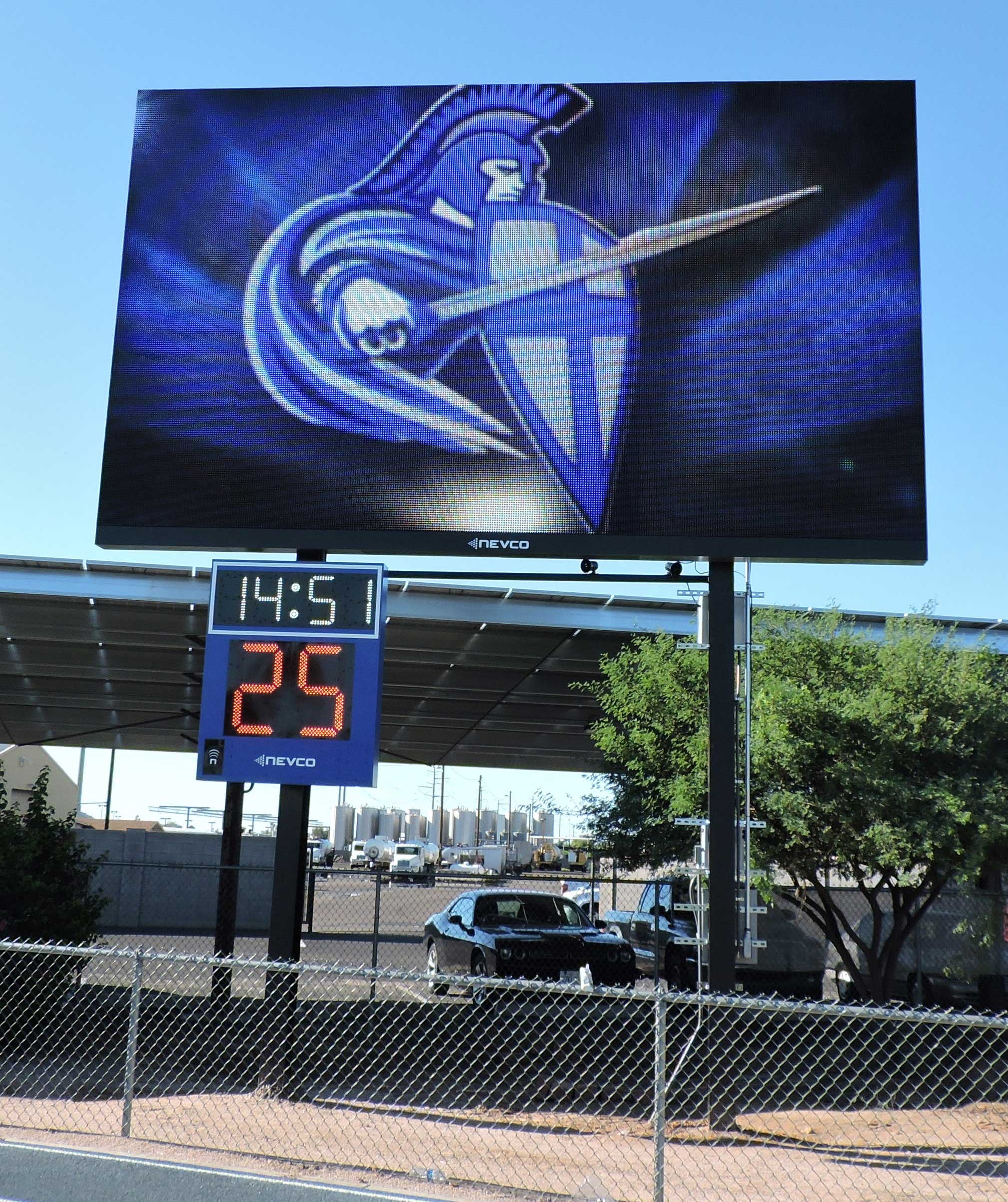 GREENVILLE, IL, December 19, 2018 – Valley Christian High School in Chandler, Arizona has built a strong foundation of academic and athletic excellence with nearly 70 Arizona State Championships, including an active streak of 28 consecutive years in which a Trojans team has won a state championship. Valley Christian continues to build on their strong winning tradition this season, bringing home a victory to Benson Field in the form of a Nevco LED Video Display.

Benson Field opened in 2001, and plays host to the Trojan football, soccer, and track & field programs. The Trojans have continued to build and enhance Benson Field over the years, including resurfacing the Dan Kuiper Track in 2011. For the 2018 season, Valley Christian upgraded their scoreboard to a new Nevco full color, 16mm LED Video Display with impressive capabilities and over 75,000 pixels. 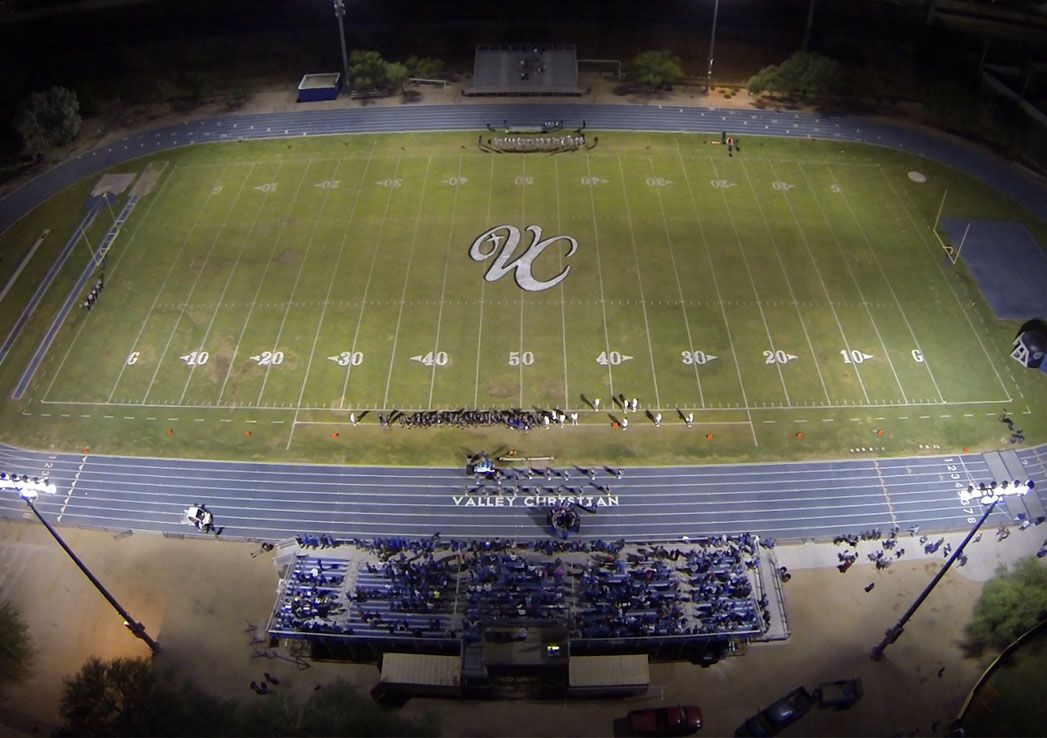 “When our 18 year-old static scoreboard completely stopped functioning this summer, we knew we wanted to go to an LED video display,” said Bryan Winfrey, Director of Communications and Marketing at Valley Christian Schools. “The ability to partner with local businesses to get their company in front of our community through video advertisements or in-game sponsorships is a game-changer. We see our video display as an opportunity each home event to showcase our athletic programs, student-athletes, academic and extra-curricular programs, school, and community. The video display gives us an unparalleled ability to deliver an exceptional game-day experience that guests would never expect from a high school and have them leave comparing their experience to that of a college event.”

After their previous scoreboard failed in August, the Trojans were left pressed for time and needed a new scoring solution installed and operational in time for their Homecoming game the first weekend in October. Valley Christian knew that they wanted to upgrade and enhance the game-day atmosphere at Benson Field with a new LED video display, but wanted to do so in a prudent and fiscally responsible manner. The school opted to partner with Nevco, the only company able to design a video display around their existing structure, and most importantly hit their five week deadline.

“We pride ourselves on having the industry’s fastest turnaround and delivery times at Nevco. Valley Christian knew that they wanted to upgrade to a video display but they were on a tight schedule, which put Nevco ahead of the pack,” said Nevco’s Vice President of Sports Video Sales, Eric Light. “Not only did utilizing the existing structure save money, but it also saved a great deal of time on the installation as well. After we received the order on August 31st, everything was shipped, installed, and ready for game-day by October 4th.”

Nevco and Valley Christian worked together to first determine that the structure was capable of supporting a new video display. After it was established that the existing structure could be used, and no modifications were necessary, Nevco custom built a Video Display and Scoring Solution to fit the structure. 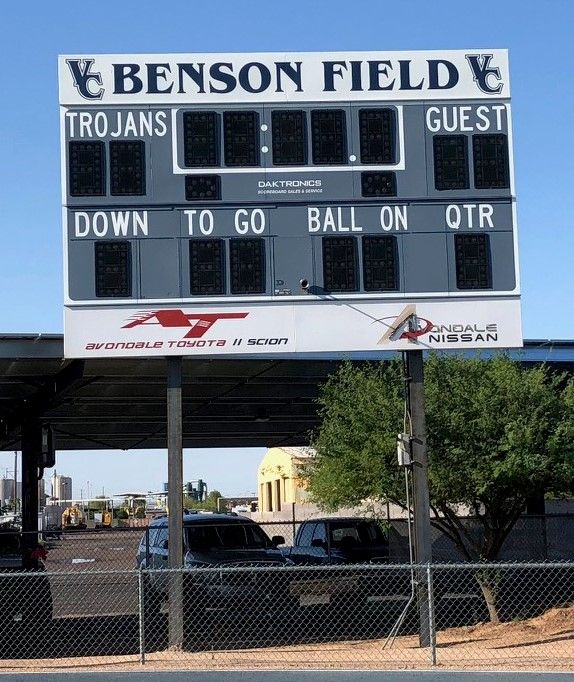 “Valley Christian contacted us wanting to use their existing structure for a new video display, and after receiving the proper measurements we determined that it was capable of holding a display up to 10 percent larger than the scoreboard that it previously supported,” said Nevco Vice President of Operational Services and Engineering, Dave Paslay. “Utilizing the previous structure saved the school as much as 40 percent on installation costs in addition to significantly cutting down the installation time for the new display.”

The new Nevco LED Video Display is fitted to the existing structure, reaching over 11’H and stretching nearly 19’W. The full color, 16mm display has allowed Valley Christian to continue building on its strong foundations in spectacular fashion. The Trojans will ease game-day operations by utilizing Nevco’s proprietary software, Display Director™, which is operated through one, universal touchscreen system. Display Director™ gives Valley Christian the ability to showcase everything from live in-game action, instant replays, virtual scoring, animated graphics, and sponsorship messages that can be played in different zones of the video display simultaneously through variable content zoning. The school also teamed up with Nevco’s HYPE Creative Services to light up the display with custom branded content including logo animations, scoring templates, head shot templates, and more.

To complete their new scoring system, Valley Christian  incorporated a set of Nevco Delay of Game Timers and a Nevco Solar Power Kit. The delay of game timers feature translucent white digits on the game timers and red digits on the play clocks. The solar power kit allows the Trojans to go green and is specifically engineered to work with the video display and i designed to withstand all weather conditions.

“We chose Nevco because of their reputation of quality products, and quite frankly, their willingness to come alongside us on the project to meet our deadlines,” said Bryan Winfrey. “Nevco was able to install using our existing structure, which saved us quite a bit in installation costs and made it a doable option for us. With the board going out literally a week before the season started, Nevco had it installed and operational by our October installation deadline for our Homecoming football game when we hosted 2,000 people.”

The Nevco Video Display and Scoring Solution was completed prior to the Trojan’s Homecoming game on October 5, when it was unveiled to fans in a 35-12 victory. Check out the live install photos, and be sure to read more about other recent Nevco projects at nevco.com. 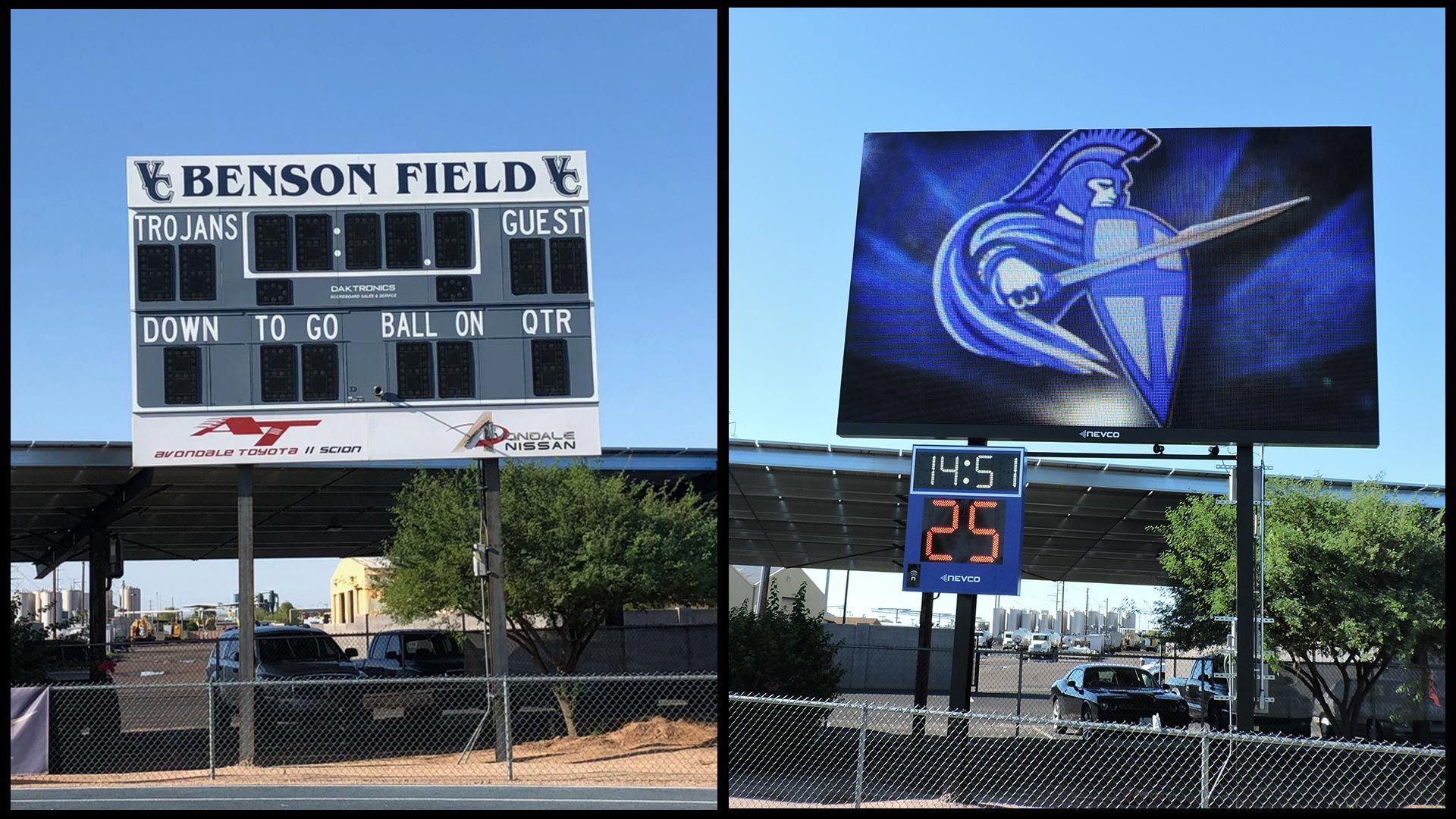