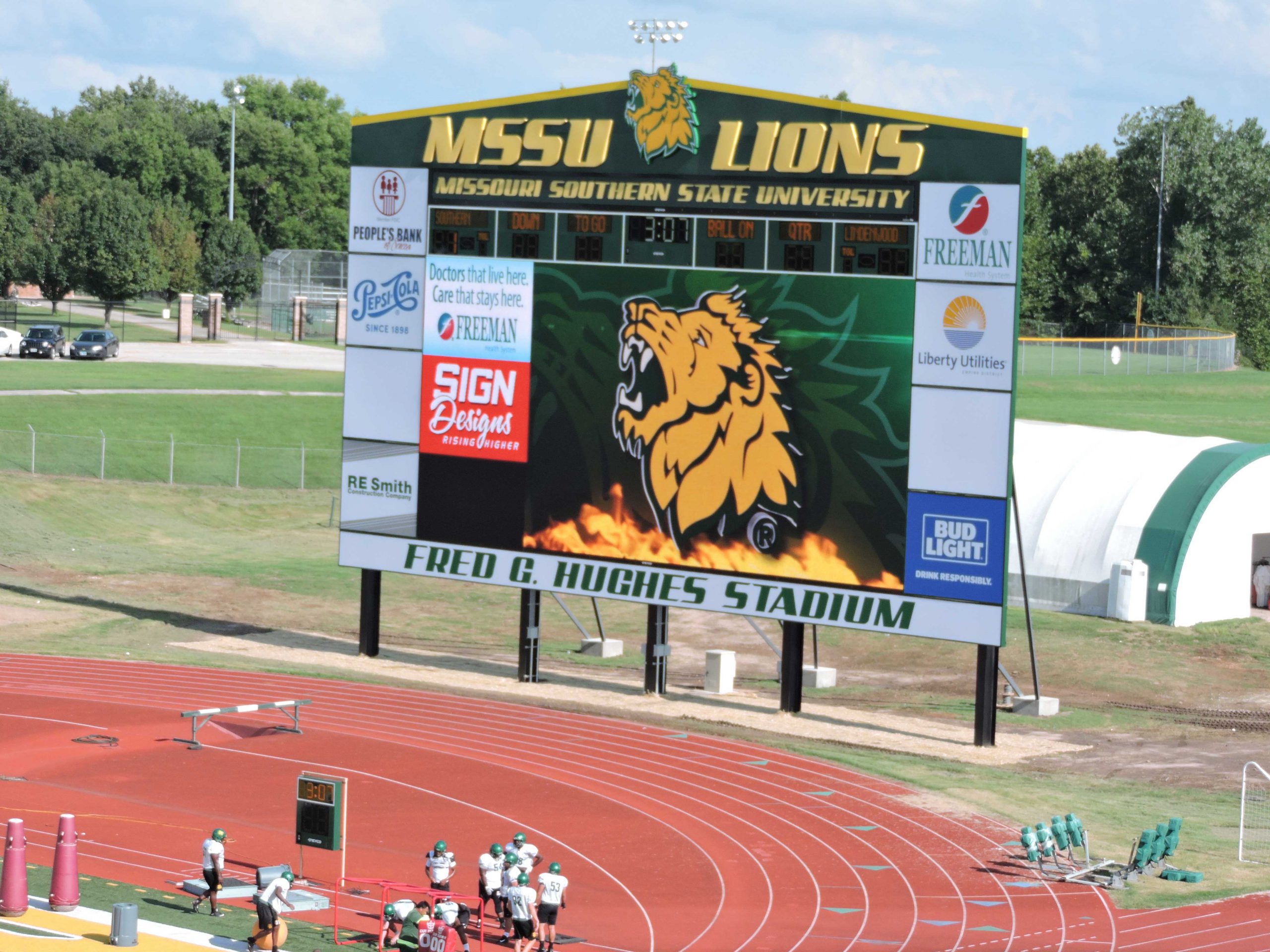 GREENVILLE, IL, October 31, 2018 – Missouri Southern State University (MSSU) football fans have even more reasons to cheer on the Lions this season, with the addition of a new Nevco Video Display, Scoring and Audio Solution at Fred G. Hughes Stadium.

Upon entering the stadium fans are sure to take notice of the massive, full color, 16mm LED Video Display which stands over 30’H and stretches more than 66’W. The board displays an impressive 718,199 pixels which can be seen from every viewing angle in the stadium with unparalleled image clarity and contrast. The video display is capable of showcasing everything from thrilling live game action and instant replays to vibrant animated graphics and sponsorship messages, operated through the use of the MotionRocket Sports Video Control System Software. The Lions worked with Nevco’s HYPE Creative Services to develop and create numerous custom branded graphics and fan prompts to show on the display including logo animations, headshot templates, and shuffles to help further engage the crowd during games.

MSSU’s new Video Display, Scoring and Audio Solution is one of the largest in NCAA Division II athletics and was privately funded by donors and advertisers. The Lions were able to secure several donations and procure numerous local advertisers to fund the project without the use of tuition dollars or state funding.

“We’re extremely thankful that MSSU chose to continue to partner with Nevco for their new video display, scoring and audio solution,” said Nevco Director of Sports Video Sales, Eric Light. “We’ve built a strong relationship with the University through the years and I think it really becomes evident on a project such as this, when the finished product is as impressive as this one. Their new display will absolutely transform the game-day atmosphere for players, fans, and the community.”

Seated above the video display is a custom 58’W LED Football Scoreboard, equipped with amber Intelligent Captions™ and Electronic Team Names. Flanking both sides of the display are (8) revenue-generating, rear-lit sponsorship signs for title sponsors in the area.

In addition to the visual enhancements, MSSU added Nevco’s Stadium Pro™ 2000 Sound System, which is easily operated and integrates in conjunction with the Nevco video display. Situated inside the structure and hidden discreetly above the scoreboard behind the sound scrim which prominently displays MISSOURI SOUTHERN STATE UNIVERSITY, the Stadium Pro™ 2000 Sound System provides crisp, concert-like audio quality throughout Fred G. Hughes Stadium.

“The Nevco team has remained committed to providing Missouri Southern State with exceptional service and top-of-the-line scoring technology for the past several years, and the video board and sound system at Fred G. Hughes Stadium is no exception.” said Jared Bruggeman, MSSU’s Director of Athletics. “It has been fantastic to see the effect that the new equipment has had on our fans and sponsors this early in the season. The video board draws the attention of the entire stadium and has made interacting and engaging with our fans simple and fun for all.”

Topping off their display, the Lions added a custom Arch Sign proudly displaying a rear-lit Lion logo, which sits between the custom 3D letters  MSSU LIONS. At the bottom of the display sits a rear-lit sign which presents the name of the stadium.

MSSU introduced the new Nevco Video Display, Scoring and Audio Solution to fans in attendance on September 8 for the Lions home opener at Fred G. Hughes Stadium. Check out the live install photo below, and be sure to read more about other recent Nevco projects at nevco.com. 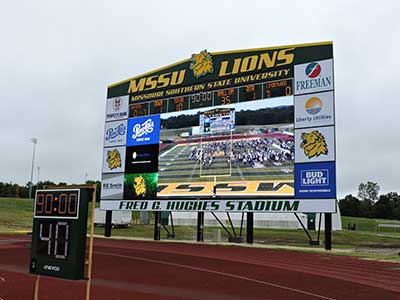