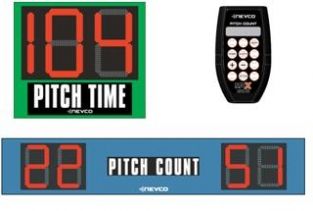 The Pitch Timer, similar to Nevco’s football delay of game timer or basketball shot clock, enables an umpire to track the time between pitches or the time between innings, in compliance with the NCAA’s rule change announcement in June of 2010. This rule change states that pitchers have 20 seconds to deliver a pitch and both sides have 90 seconds (or 108 seconds to change sides between innings. The product includes a display that shows the elapsed time, which is controlled by a wireless, handheld device, typically operated by an umpire. The display can be mounted along with the existing scoreboard or separately, as necessary. The product also includes a horn to sound the end of the time interval, as required by the NCAA regulation. Nevco’s pitch timer product that can be added to any existing Nevco scoring solution or a scoreboard from any other manufacturer.

The Pitch Counter utilizes a similar display and wireless, handheld controller to track the number of pitches thrown by the pitchers of both teams. The display can be integrated with the existing scoreboard or mounted separately, and works with scoreboards from any manufacturer. The Nevco pitch counter helps coaches and officials comply with Little League Baseball rules in the US and Canada, which dictate a maximum number of pitches that can be thrown by a player in a day, and also specify the required days of rest a pitcher must have before pitching again, based on the number of pitches thrown.

Both products will support the industry-leading MPCX wireless handheld controller, with a range of up to 1000 feet and exceptionally long battery life. The MPCX controller has a user-friendly, intuitive interface, so it can be operated by an umpire, a coach or even a parent in the stands.

“These new products will help baseball coaches and administrators to enforce the rules that keep players safe and make the games more exciting for the fans,” said Eric Light, Director of Sales for Nevco, Inc. “Nevco is excited to be talking with other leaders in baseball about how to implement these changes into their programs quickly, easily and cost-effectively.”

The 66th Annual ABCA Convention and Exhibition convenes at the Nashville Gaylord Opryland Resort, January 6 – 8, 2011. The ABCA expects more than 3800 attendees, including coaches and administrators at all levels of play. ')}