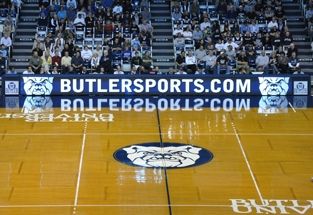 Nevco LED scorers tables have greatly simplified the management of available inventory and virtually eliminated any ongoing operating expenses involved with sponsor inventory management. Increased available advertising is the most significant benefit resulting from LED technology.With more games being televised, LED technology has opened up a tremendous potential increase in sponsorship revenue by increasing the reach and exposure of their advertising power to thousands of people in their homes as well as the fans at the game.

Located five miles from downtown Indianapolis, the 290-acre Butler campus is hailed as one of the most attractive in the Midwest for its park-like setting. In the past decade, Butler athletic teams have captured 26 conference championships (in four different leagues). The Bulldogs have made appearances in NCAA National Championship Tournaments in men’s and women’s basketball, men’s soccer, volleyball, men’s cross country, lacrosse and baseball. Butler won the James J. McCafferty trophy, awarded annually by the conference for all-sports excellence based on conference championship points, a league record eight times, including three straight from 1996-97 to 1998-99 and back-to-back years in 2001-02 and 2002-03. The Bulldogs captured the trophy again in 2009. ')}