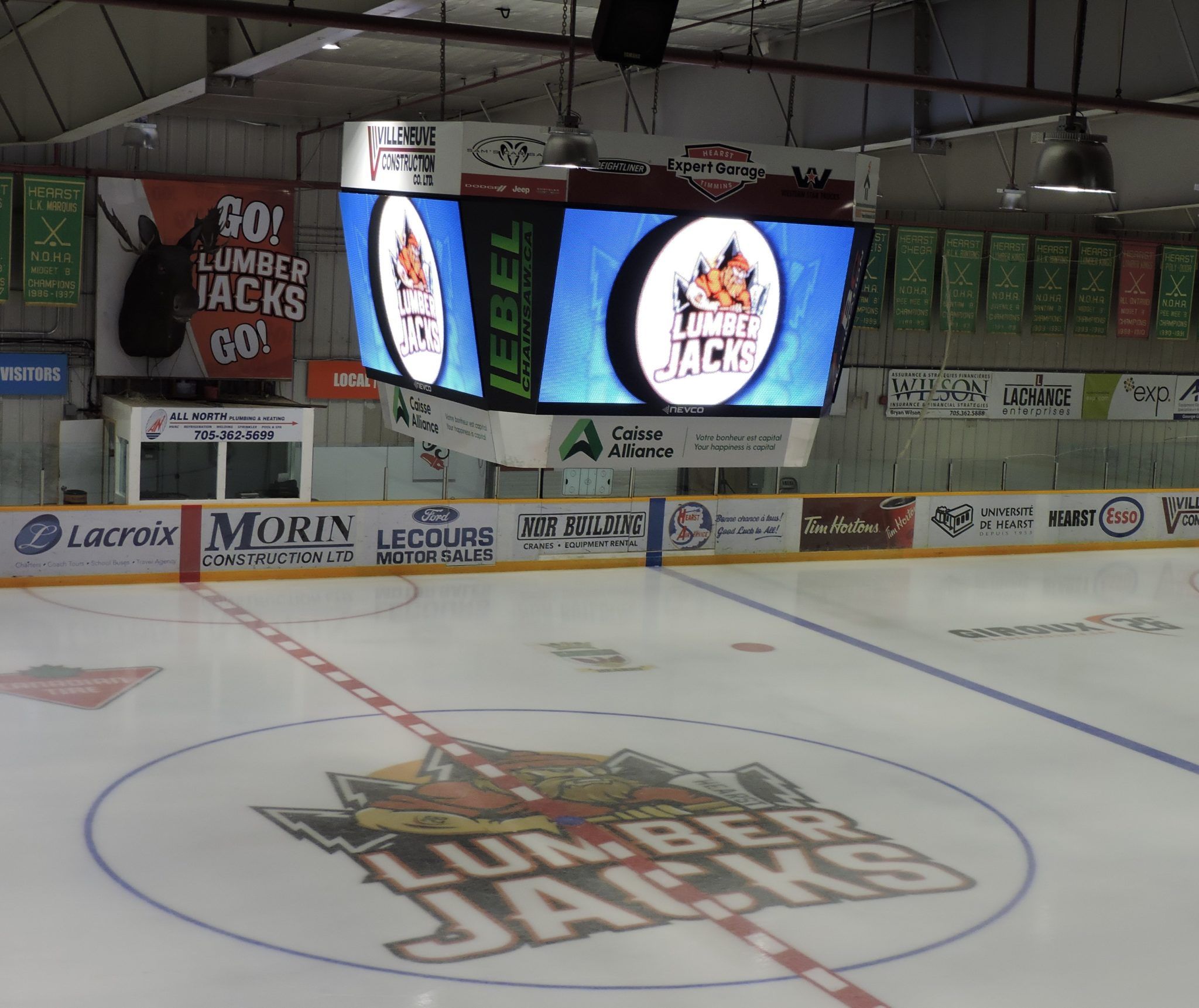 GREENVILLE, IL, March 13, 2020—A hometown arena can gain credibility and generate a great deal of excitement with a brand-new video display and scoring solution. Fans attending games at Claude Larose Recreation Centre in Hearst, Ontario, Canada get to experience this excitement firsthand when entering the arena this season. Once fans step inside, they are sure to take notice of the new Nevco 4-sided, full-color LED Video Display hung above the center-ice faceoff circle.

As a primary public gathering space and monument to local athletes and sports legends, the Claude Larose Recreation Centre is a staple in the community.

“The scoreboard has brought new life into the community,” says Guy Losier, Director of Parks and Recreation for Hearst. “I’ve been getting calls from hockey coaches, rec directors and municipalities asking about it.”

According to Nevco Canadian Sales Consultant Paul Leskew, the new scoreboard cements the reputation of the Claude Larose Recreation Centre as the “epicenter” of junior hockey in the area. “The town itself is steeped in a deep tradition of Canada’s national sport: hockey. NHL stars both past and present have originated from Hearst including the centre’s namesake, retired Montreal Canadiens hockey star Claude Larose and current Philadelphia Flyers team captain, Claude Giroux,” he shared.

“To honor this legacy, we worked with Guy to provide the complex with the best and most state-of-the-art technology, featuring 193,536 pixels, cameras for instant replay, non-illuminated signage, and custom-branded graphics from HYPE, Nevco’s creative services division.”

The Claude Larose Recreation Centre is already seeing the benefits of its new scoreboard. The complex is home to the 2019 Northern Ontario Junior Hockey League champions, the Hearst Lumberjacks, whose logo and uniforms are a nod to Claude Giroux. The Lumberjacks organization is dedicated to the growth of its athletes on and off the ice. They provide tools to help their players achieve scholarships and be exceptional representatives of the community. According to Losier, the team is making full use of all the upgraded functionality, including game-day matchup animations and fan prompts through HYPE.

“We’re able to provide a better crowd environment which is important for the town’s main gathering place,” he says. “We have many more opportunities for interactive fan experiences, advertising and flexibility with our broadcasts.”

The adaptability of the new scoring solution gives the centre the ability to utilize variable content zoning to simultaneously display content in fully customizable zones on the video display. The Claude Larose Recreation Centre has taken full advantage of this feature by showcasing multiple events at one time.

“During a recent meet, there wasn’t enough poolside seating to accommodate all of the competitors and their parents. We relocated the centre ice camera to the pool and live-streamed the swim event on the centre ice hockey scoreboard. Another first for Hearst—broadcasting a competitive swim meet in the ice rink while a hockey game was in play,” shared Loiser.

Leskew reports that the new scoreboard has opened the door to other business opportunities for the complex as well. “They have plans for trade shows,” he says, “and the centre is hosting the North Eastern Ontario Recreation Association Provincial conference this fall. They have also set up an exhibitor fair program that will feature vendors displaying products for the Recreation Industry Market on the video screen during the conference.” 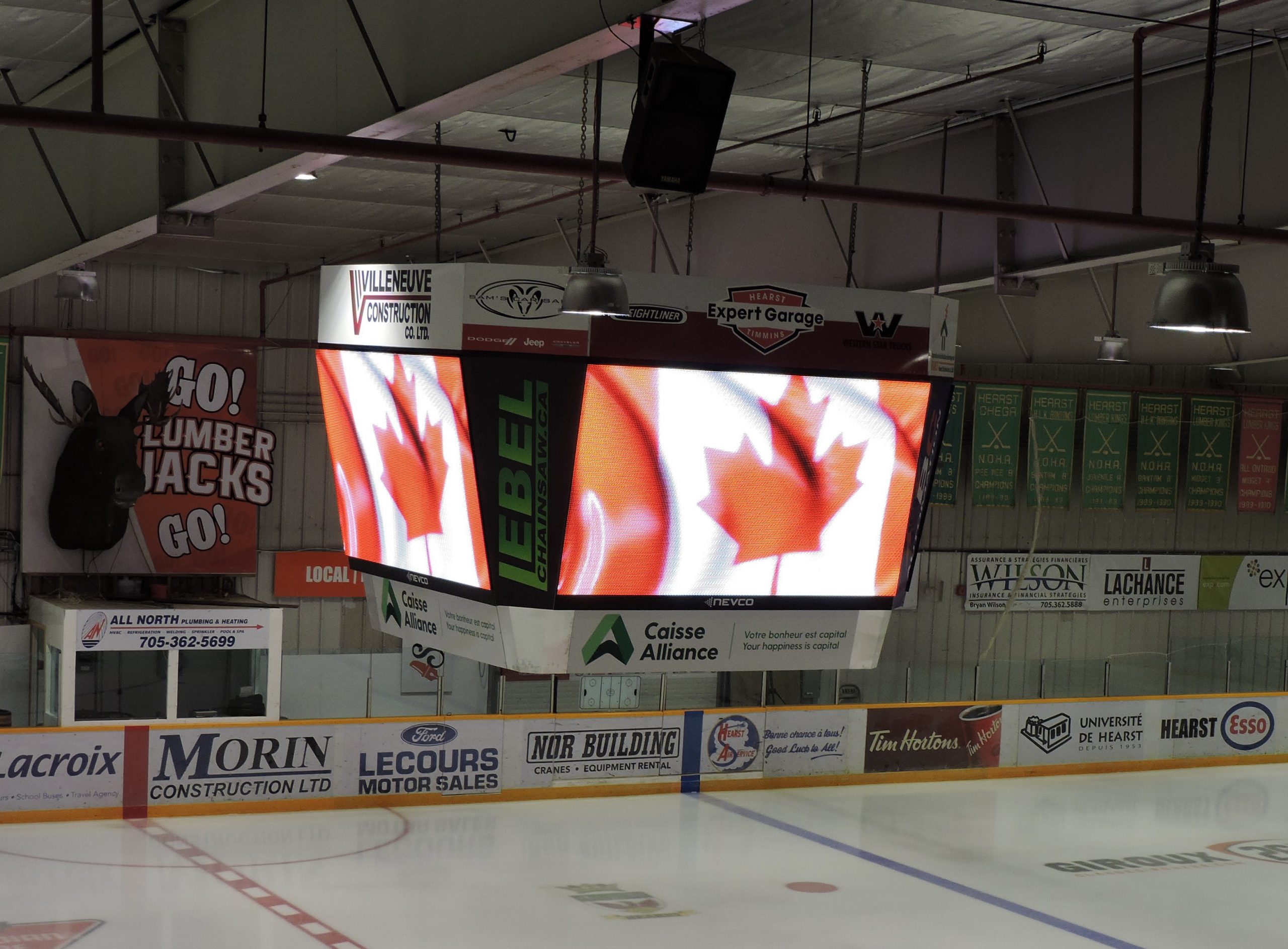 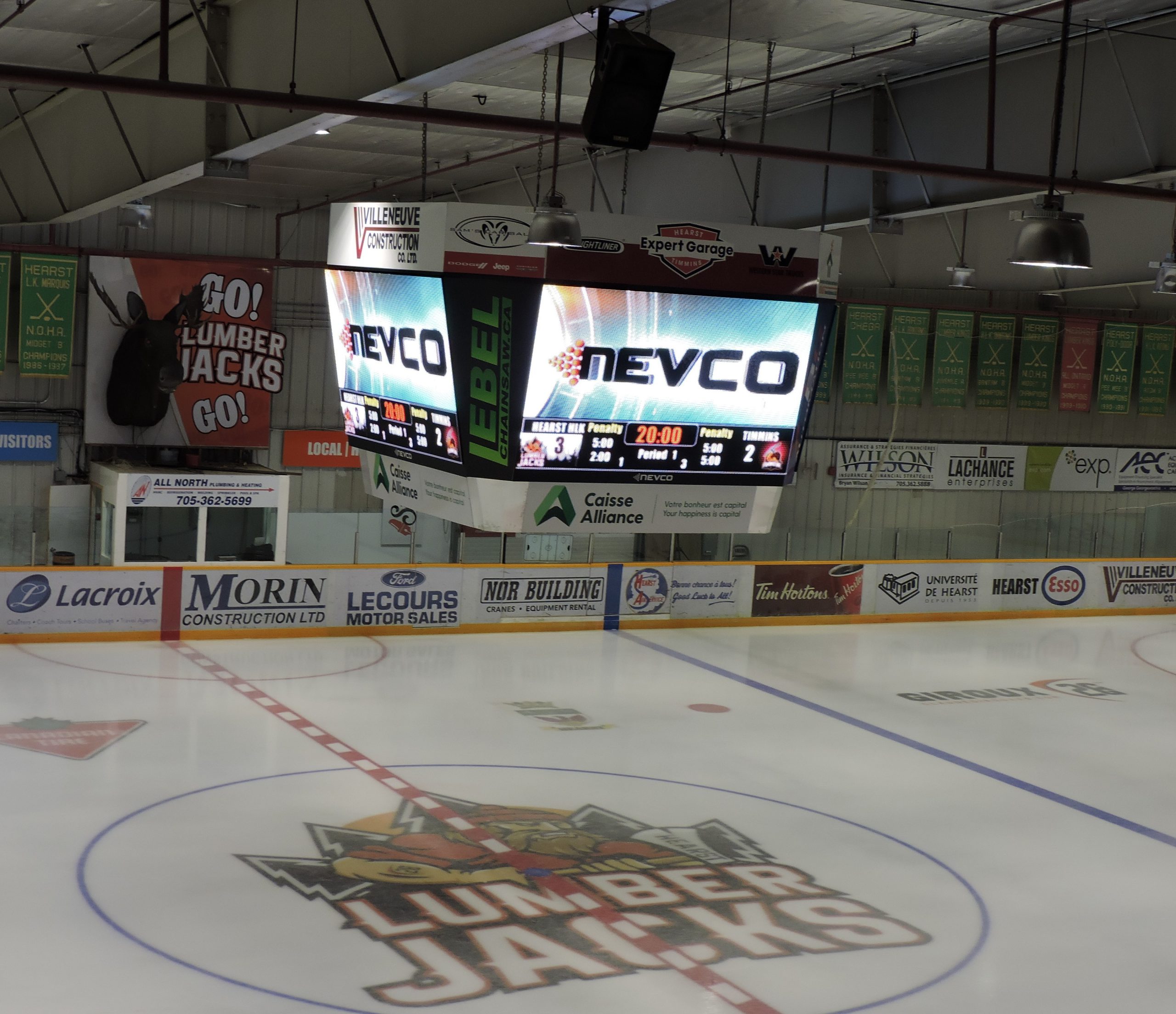 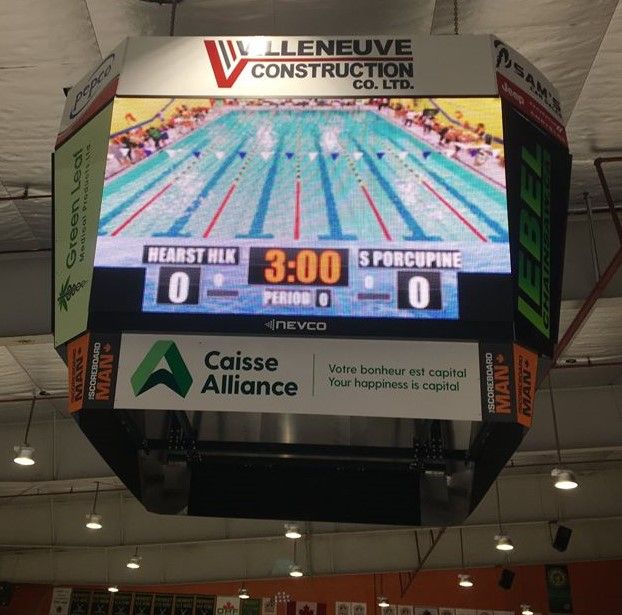