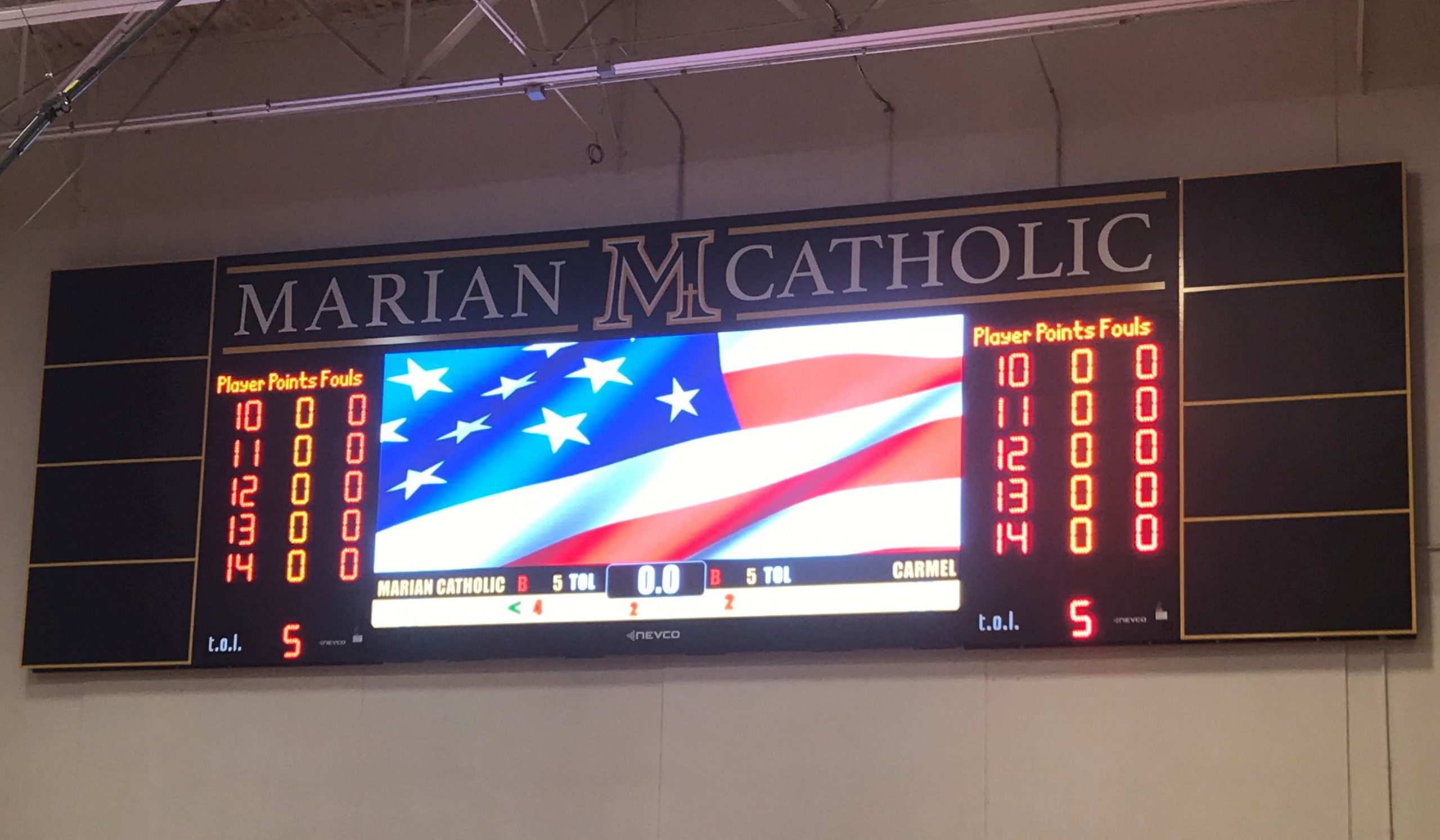 Mounted to the wall above the bleachers at Casey Court, which houses the Spartans basketball, volleyball, and wrestling teams, is an eye-catching new Nevco full color, 6mm LED Video Display that extends nearly 8’ H and spans almost 15’ W. The video display grabs the attention of fans with more than 273,000 pixels, with unmatched brilliance and clarity.

“We are ecstatic to have the opportunity to collaborate with Marian Catholic and Slam Dunk on this project,” said Dillon Brasher, Nevco Sports Video Sales Consultant. “The new video display will provide an unbelievable new game-day experience while offering Marian Catholic new ways to promote their partners and engage fans.”

Flanking the sides of the Spartan’s new video display are SD 7-9 Stat Panels featuring electronic captions, which allows for easy switching between sports and stats to be displayed for up to six players. Also included by the Spartans are SSC-T5 Shot Clocks with  game time, which are integrated with Marian Catholic’s new End of Period Lights on the backboards and Locker Room Clocks. Seated above the video display and the stat panels is a non-illuminated sign which prominently displays MARIAN CATHOLIC with the school’s logo centered between the words.

“Nevco and Marian Catholic have been working together for nearly 20 years, and I am extremely grateful to continue the relationship with such a class act in Dan Kozlowski and with such a top rated school,” said Gerry Dvorak Reid, Nevco Integrated Display and Scoring Consultant. “One of the greatest parts about working with Marian Catholic is that their vision is to make a profound impact on not only the athletes, but all of their students by utilizing their Nevco equipment as learning tools both inside and outside of the classroom.”

In recent years, Nevco and Marian Catholic have collaborated to bring 24’ of full color, LED Scorers Tables to the Spartan’s courtside, Model 1608 Scoreboards for the baseball and softball fields, and a Model 3604 football scoreboard featuring Electronic Team Names™ complete with a 32mm Monochrome Message Center at Dave Mattio Field.

“Teaming up with Slam Dunk helped afford us the opportunity to bring such a substantial enhancement to our gym at no cost to the school (thanks to a generous donor),” said Dan Kozlowski, Vice President for Advancement at Marian Catholic High School. “We are tremendously thankful and thrilled to have a virtually limitless amount of sponsorship opportunities at our fingertips, in addition to providing our players and fans with memorable game-day experiences. This new scoreboard will make Marian Catholic one of the few schools in the country that has a piece of equipment like this and we couldn’t be more excited!”

Through Slam Dunk Sports Marketing and a generous donation, Marian Catholic High School received the brand new video display and scoring solution. To assist with Marian Catholic’s sports marketing efforts, the school also included sponsor panels on the sides of the scoring solution featuring eight slots for sponsorship opportunities. Slam Dunk Sports Marketing assists in the procurement of sponsorships to fill the panels in addition to advertising on the video display, to generate revenue for the school and its athletic programs.

“The partnership between Slam Dunk Sports Marketing and Marian Catholic High School has been the definition of ‘wow-factor’! It has been a pleasure to partner with a great school, and to assist them in acquiring the new LED video display for their gymnasium. We look forward to a long and successful relationship with MCHS” said Spencer Jared, Director of Sales and Development for Slam Dunk Sports Marketing.

The Spartans unveiled the new Nevco Video Display and Scoring Solution on January 23rd for a women’s basketball game. Check out the live install photos below, and be sure to read more about other recent Nevco projects at nevco.com.